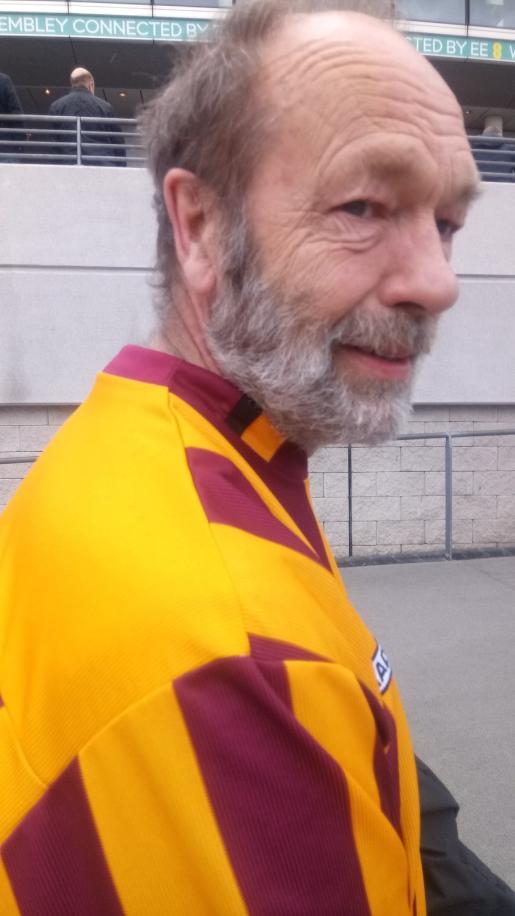 I’m David Barlow – Sam’s fellow team mate and fellow officer of the Bradford League and we were, at times, fierce opponents.

I want to share with you why Sam will be missed so much in the chess world and especially at the schools where he taught chess.

Many thanks to those who have passed on their fond memories to me.

Sam was extremely loyal to his club South Bradford and the Bradford Chess Association. I had planned to say “as with football, Sam was a one club man”. However, I discovered only 5 minutes before my speech, that Sam was once an avid Stoke City fan. If I had known this, I would have given him some stick.

We have been members of the same club for 32 years – and many others had been for even longer. Sam had been part of winning division championship teams, most notable Division 1 (‘Premiership’) in 2010 and Division 2 last year.

However, Sam had many red lines not to be crossed. One principle was ‘Dave, you MUST play the best team’, which often meant Sam would not playing in the first team.

‘…the way one plays chess always reflects the player’s personality. If something defines his character, then it will also define his way of playing... – (Vladimir Kramnik)

I’m sure Sam would have agreed. He was as competitive in chess as in tennis.

Sam loved to attack in chess, just as he attacked life. Although Sam refused to watch boxing, he did like the violent side of chess.

Which explains this tribute on the Much Loved site from Finnlay aged 8:

-My favourite memory of Mr Scurfield is when he was teaching us to play chess, he would say the pieces would “clobber” each other ... I don’t even know what that means but it really made me laugh!’

Sam was a good, and feared player. When I visited him at the hospice, I told him that another player had said this. He thought it was rubbish.

The truth was that he was statistically above average and was always a threat to stronger players because of his aggressive style.

Like most chess players he would agonise over a lost game or a bad move. Often for days after. It’s like being a Bradford City fan but worse. On the way home after a match, he was known to bang repeatedly on the steering wheel, regretting not seeing the right move.

Sam would have been even an better player but he was a self-inflicted serial victim of ‘time trouble’ – which is leaving yourself little time to play the remaining moves.

Once, when I was playing, I could see Sam mouthing angrily at me to move quicker. Afterwards I pointed out the irony of his silent shouting...and that it is illegal to do so. Such was his desire for the team to win.

6 years ago, we played a hard-fought game. Sam, with only seconds left on his clock, was one move from delivering checkmate. In his panic he couldn’t see the move in time and lost the game. Even at the last time I saw Sam – on Christmas Eve – he was still ranting about THAT game.

In spite of the angst after every game, he never lost the desire to improve and to learn. He was passionate about chess and the value of chess for learning and life.

I suspect his philosophy to chess, with some politics thrown in, could be summed up as another grandmaster said…

The beauty of chess is …’it transcends language, age, race, religion, politics, gender and socioeconomic background. Whatever your circumstances, anyone can enjoy a good fight to the death over the chess board. (Simon Williams)

“Good Morning all you Chess Players! I will love chess forever now.”

At our annual tournament Sam was ever-present, playing and also contributing to thee setting up and clearing away of tables and equipment. Even in last September, clearly unwell and unable to play, he came to help put away tables with conscripts Ruby and Chester in tow.

For years Sam gave lifts (in his dodgy cars) to his team mates and especially his blind compatriot, Steve.

We spoke on the phone every week to make arrangements for the next game. Never more than ten words between us. “Can you play? Yes. Can you pick up? Yes, Bye.”

Sam would also give credit and thanks, more than anyone, but always in very few words. “Great job” “Well done”

But if something needed doing, Sam would not hesitate in telling you.

Sam was President of the Bradford Chess Association. It’s just a title, but it allowed Sam to attend committee meetings where he would stamp on any waffle and ensure that a decision was made. Forever blunt.

Sam had one great quality – honed by street performing – his voice – which we exploited shamelessly.

At the start of chess events, Sam was used to call to attention a ‘brood’ (yes, I discovered that a brood, as in children, is a collective name of chess players) with a booming, GENTLEMEN, QUIET PLEASE!

He was our MC for all occasions.

On every occasion Sam’s dedication and support to Bradford chess and his team mates was self-evident. So, it was humbling to hear that Sam has made donations to his club and League.

We will ensure that this money will be spent to honour Sam and support the development of chess, especially for juniors.

The Bradford League makes an annual award, the Carey Trophy, to someone who has made a big contribution to local chess. Given Sam’s health it was decided to make the award to Sam in advance. But as Sam was not one for sentimentality, we decided we had better check with him first if he would accept the trophy.

We were very grateful that he said yes. The engraved trophy and photo are here today.

We will greatly miss his loyalty, reliability, sense of fairness, opinions, enthusiasm… his voice.

Attached is Sam's game against Marian Petrov, played at a simultaneous exhibition in 2015. In these events, a strong master plays multiple games of chess against multiple willing (victims) participants, usually ending with a significant plus score for the master. Clearly, Sam had not read the script...

Personally, I have played Sam on two occasions. On each of those occasions, I walked into game feeling good, and walked away suitably frustrated as Sam chipped away at my grading with two wins out of two. The second of those games was played in October 2019 and is included here. I feel it showed how Sam could suddenly turn on the attack and convert a quiet, essentially even position into a one sided demolition.