The Bob Burns Summer Tournament 2019- A Five Round Swiss Tournament

Note from the competition controller - Round 5

In these year's Bob Burns tournament, it all came down to the final round. Mark Crowther and Phil Watson were leading the field by half a point and whoever won there match would crowned champions. In the chasing pack Peter Rooney, Dave Barlow, Mike Walker and Keith Marsh, who has had a great tournament to join the elite bunch of title contenders, were waiting to pounce if Mark and Phil didn't claim a victory. Mike Walker was the first to strike a blow against Keith who can hold his head high, only losing to Peter Rooney and Mike Walker on the way. This put Mike in the driving seat as that meant a win for either Peter or Dave would leave them level on points but one point behind in the tie-break. Peter was the next to finish against Dave who tried to put a defiant fight but the damage was already done earlier on and Peter drove home his positional advantage. Poor Mike had to wait as Mark and Phil took their game to the wire timewise to add to the tension. In their game, Phil had an early lapse in concentration and misplayed the opening. Mark happily took advantage to gain a strong position but Phil rallied and put up a dogged defence to thwart his opponent's attacking chances but spent a lot of time in doing so. Mark then expended a lot of his time trying not to let Phil into the game and find that elusive killer blow but with both players running short of time, Mark offered the draw which Phil was happy to accept. This meant that four players finished with 4 out of 5 to share first place with the trophy going to Mike Walker on the tie break. Congratulations Mike.

Keith's efforts were not totally in vain as he managed to claim the Band 1 grading prize with the Band 2 grading prize going to Paul Kadzionis who had earlier beaten fellow club mate Barry Thompson. It was also nice to see two new players in the tournament, Karl Rayner from South Bradford

and Shipley's Alex O'Connell. Both managed to play some decent games and as they gain experience, will develop into useful players. 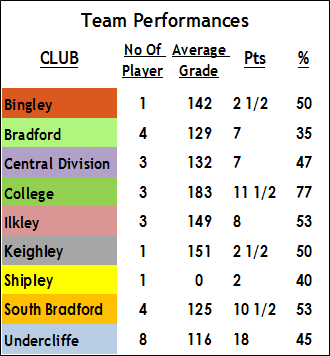